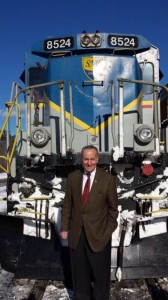 U.S. Sen. Charles Schumer (D-N.Y.) said Wednesday that he had stopped a Republican proposal in Congress that would have stopped work on the East Side Access project and the Second Avenue subway.

The U.S. House of Representatives proposal would have cut funding on the East Side Access by 47 percent and reduced money for the Second Avenue subway by 21 percent, Schumer said.

Schumer fought against the proposed cuts in a congressional conference and managed to restore the funding to make sure work continues on both projects.

“East Side Access is a transformative infrastructure project that employs thousands of New Yorkers and will shave off commute times for tens of thousands of commuters from Long Island,” Schumer said. “While the cuts passed in the House put the project on life support, I am pleased that we were able to beat back these cuts and keep the project moving forward.”

The East Side Access will bring Long Island Rail Road trains into Grand Central Terminal and the Second Avenue subway will relieve critical crowding on the Lexington Avenue line, which carries 40 percent of all subway passengers in New York City.

Reach contributing writer Philip Newman by e-mail at timesledgernews@cnglocal.com or phone at 718-260-4536.

One thought on “Schumer protects funding for East Side Access, 2nd Ave. subway”