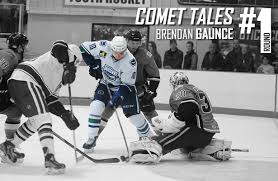 The Western Conference Finals are now all tied up at one game apiece after the Utica Comets dropped Game 2 to the Grand Rapids Griffins on Monday night at The Utica Memorial Auditorium.

Dylan Larkin found his first professional goal in his second professional game after Andreas Anthanasiou popped the puck from behind the net directly into the center slot. Larkin didn’t hesitate as he rocketed the shot past Jacob Markstrom’s glove hand for the 1-0 lead with five minutes left in the first period.

It was all Larkin again just 3:27 later after a defensive mistake allowed him to take a harmless looking shot from just above the left circle. Markstrom made the initial save but as the puck hit his leg pad it popped up and over and crossed the goal line to give the Griffins the 2-0 lead, something the Comets had done just a night earlier.

The Griffins doubled their lead in the second period with two power-play goals from both Teemu Pulkkinen and Tyler Bertuzzi, the Griffins top two goal-scorers this postseason. Their first came at 14:12 following a slashing minor from Comets center Wacey Hamilton. A hiccup in the Comets defensive zone left the puck free in the slot as Pulkkinen picked it up and ripped it short side for the 3-0 lead and his league-leading 14th goal of the postseason.

Their second power-play goal and their fourth overall saw Bertuzzi rip a shot off to the right of the slot and through the legs of Markstrom to make it 4-0 before heading into the third period.

Joacim Eriksson made his first postseason appearance for the Comets as he replaced Jacob Markstrom for the start of the third period. The Swedish goaltender only face two shots from the Griffins the entire third period.

The Griffins made things a little bit easier on the Comets after taking two consecutive delay of game penalties at the end of the third period. With less than six minutes left Bobby Sanguinetti was able to keep the puck inside the blue line followed by a dish back to O’Reilly on the boards. With a wide-open Gaunce in the center slot, O’Reilly fed it across to the middle and Gaunce rocketed it home for the power play goal and his fourth of the postseason to make it a 4-1 game.

With only 2:30 left in the game, the Comets found their second power-play goal after a nice set up in the crease from both Gaunce and O’Reilly. Baertschi received the puck to the right of McCollum and popped it past him to make it a final score of 4-2.

Special teams on both sides of the ice did some work on Monday night with a total of four power-play goals.

The series now shifts to Grand Rapids, Michigan as the two teams will play Games 3, 4, and 5 at the Van Andel Arena starting on Thursday night.