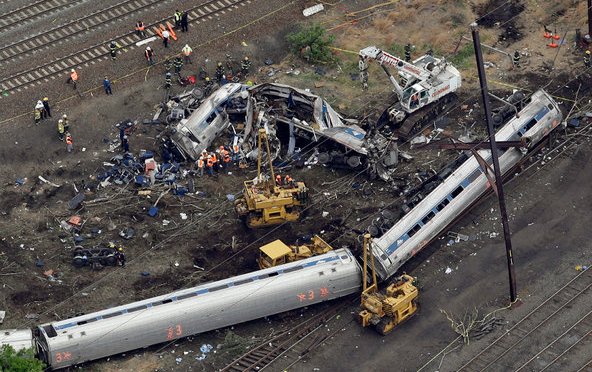 Federal investigators were on the scene of an Amtrak Northeast regional train derailment north of Philadelphia that occurred Tuesday night. The incident left six people dead and more than 140 injured.

The National Transportation Safety Board (NTSB) launched a go-team to the site and was expected to announce additional details about the accident later this morning. The cause is not yet known.

The U.S. Department of Transportation will assist the NTSB in the investigation, U.S. Transportation Secretary Anthony Foxx said in a prepared statement.

About 238 passengers and five crew members were on board Amtrak Train 188 when it derailed on a curve around 9:30 p.m. Tuesday. At a press conference later in the evening, Philadelphia Mayor Michael Netter described the scene as “an absolute disastrous mess.”

We have written before on alternate routes, but not in anticipation of an accident.A few years ago, we wrote a story on going up the Northeast Corridor from Delaware to Old Saybrook using commuter lines. Here’s an update

Yes, with a little thinking, Amtrak could have had a “disaster plan” to work around this accident. There should have been several by passes arranged

1. Hispeed line to Camden then River line to Trenton (not an easy task.  Need to use SEPTA regional rail, a bus, or a streetcar and walk.  Easy to get lost and hard with luggage).