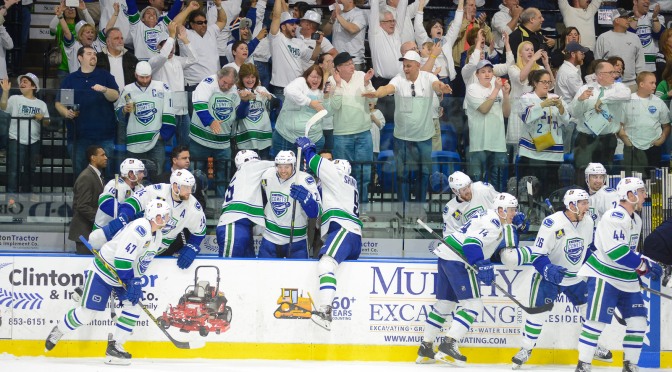 For the first time ever in the history of Utica, N.Y. an American Hockey League team has advanced to the second round of the Calder Cup Playoffs after defeating and eliminating the Chicago Wolves 4-2 and in Game 5 of the Western Conference Quarterfinals Friday night at The Utica Memorial Auditorium.

Brendan Gaunce (2-0-2) lit the lamp twice on the power play after being the healthy scratch for games three and four. Cal O’Reilly (0-3-3) continued to do what he does best by tallying three assists including one on the power play game-winning goal.

(1-0-1) and Sven Baertschi (1-1-2) also found the back of the net that enabled them to advance to the next round of the playoffs.

Utica dominated in the shots department through the first period but their efforts didn’t see results until the opening seconds of period number two. Just prior to switching from a 4-on-4 to a 5-on-4 penalty kill, the Comets found their first of the game just 18 seconds in after DeFazio hopped through a couple defenders on a solo effort. DeFazio quickly brought the puck from his backhand to his forehand and lifted it to the top shelf just inside the crease to make it a one nothing game.

Just short of seven minutes later the Wolves answered back on the second half of a double minor taken by Alex Friesen for high-sticking. Magnus Paajarvi positioned himself in the right as he buried a shot that was fed to him by Shane Harper. The Wolves power-play goal that tied the game 1-1 was Paajarvi’s third of the series.

At 11:12 the Comets took their turn on the power play and after a couple of failed attempts, one last shot was in order as Brendan Gaunce raced in down the left wing and slapped one into the white netting for the power-play goal and the 2-1 lead at 12:36. Alex Friesen was credited with the primary assist.

The Comets didn’t have much time to celebrate as the Wolves scored exactly 30 seconds later on a slapshot from Joel Edmundson that snuck through Markstrom and all of the traffic he was battling in front of the crease. Shane Harper assisted for the second time in the game on the Wolves equalizer.

Gaunce decided he hadn’t finished producing for the night because just over two minutes later the rookie forward scored his second power-play goal of the night after Baertschi’s shot left a rebound in front of the net.

The 3-2 lead was enough to hold the Wolves off and the Comets sealed the deal at 19:16 after Baertschi spiked it towards the mesh for the empty-net goal and the 4-2 lead. Cal O’Reilly tallied the primary assist for his third of the game and Bobby Sanguinetti also had his hands in on the play for his second of the game.

Now that the Comets have secured a spot in the second round of the Calder Cup Playoffs, their match-up is still to be determined. As of right now, the Comets could either face the Toronto Marlies or the Oklahoma City Barons depending on the turnout of the Grand Rapids Griffins and the Marlies series that’s taking place this Sunday afternoon.

Yup, we have talked about her before.

For nearly three years, CEO Marissa Mayer has tried to reinvent Yahoo, the Web search and services company that reigned supreme in the early days of the Internet. But the incredible growth of Google’s search engine and Web advertising business drained away revenue that once would have been Yahoo’s. Mayer, a former senior Google executive, was recruited to put Yahoo back on track to growth. Reviews are mixed on Mayer’s performance so far. Some have said that Mayer has done little to fix Yahoo’s fundamental issues, pointing to the company’s poor financials and falling search ad revenue. Still others note that it took turnaround experts, including Apple co-founder Steve Jobs, several years before they could truly make a difference in their ailing companies. Despite the criticism, Mayer is persevering with a strategy she believes will lead to future success. This slide show looks not only at Mayer’s strategy for future growth, but also how Yahoo is slowly but surely changing. Whether her plans will actually work remains to be seen. But Mayer should be given credit for keeping Yahoo on an even keel in the face of intense competition from Google and many other Internet services companies.

Redesigned Microsoft Pact Is CrucialThe joint announcement between Microsoft and Yahoo could be a major victory for the online company. For one thing, it doesn’t change the revenue-sharing agreement, which means a large portion of Yahoo’s revenue—31 percent in 2013, alone—will still be generated from Microsoft’s ad services. In addition, it forces Microsoft to start selling its own ads, which reduces Yahoo’s costs. It’s a win-win.

It’s All About the Acquisitions

If anything can be said about Marissa Mayer, it’s that she sees value in acquiring other companies. In the last couple of years, Mayer has acquired a host of companies across a wide range of markets. Chief among them is the Tumblr microblogging service, acquired in 2013 for $1.1 billion. Tumblr is central to Yahoo’s efforts to build a bigger, more loyal user base.
(3)

Yahoo Trying to Catch Up on Mobile Services

Mayer has said that her company has not done enough to focus on mobile. At one point, the company had just 100 engineers working on all its mobile efforts. Last year, Mayer made several public statements saying that mobile would be a driving force in Yahoo’s resurgence and she has made good on that promise with heavy investments in mobile applications development. Whether it’s too late, however, remains to be seen.
(4)

Research firm eMarketer said Yahoo’s search ad revenue declined over the past several years and predicted the company’s digital ad revenue will continue to slip. Part of the issue is Yahoo’s difficulty attracting corporate advertisers that have the budgets (and desire) to go to its network of sites and services. Yahoo needs to change its strategy in that space to improve relations with corporate advertisers and attract more spending dollars for digital ads if the company is going to get back on track for sustainable growth.
(5)

Yahoo was a minority owner of Alibaba, the Chinese e-commerce company. Yahoo reaped billions of dollars following Alibaba’s initial public offering in September 2014. Yahoo can use those billions to acquire other companies or try out new ideas. But Mayer has said that she believes the company’s ample cash should be used to invest in high-quality employees and develop products internally that will appeal to a larger segment of the population. It’s a smart move.
(6)

Use the New Deal to Take More Control Over Search

One of the core components in the new pact with Microsoft is that Yahoo will have the right to enhance the search experience across for users of desktop and mobile devices. That’s a good thing for Yahoo. The company’s search is still popular internationally, but is facing increased pressure from Google and Baidu. Having more control over Web search development means Yahoo can more readily adapt to the changing times in search.
(7)

One of the more surprising moves Yahoo’s Mayer has made over the last few years has been to invest in well-known media celebrities to build out her company’s content business. Chief among those hires was Katie Couric, who Mayer tapped as the company’s global news anchor. Yahoo has also brought on several other major personalities, including the former “American Idol” judge Simon Cowell, to improve its content offerings. The idea? Drive more advertising revenue through content that’s exclusive to Yahoo.
(8)

Yahoo is a global company, but its presence in several key markets, like China, is troubling. Yahoo needs to work hard at building out its operations in Asia and Europe and be a bigger player in those markets. Once upon a time, Yahoo was the dominant force in search worldwide, but now Google and local competitors are far ahead. Yahoo needs to address that sooner rather than later.
(9)

Yahoo has made a series of rather interesting acquisitions in the analytics business with the purchase of such companies as Flurry, Lexity, Ztelic and others. Analytics plays a major role, not only in building out an advertising business, but it can also help Yahoo gauge where user interest and activity is going. Yahoo can then respond with services of its own that appeal to user demands. Don’t underestimate the importance of analytics in the Yahoo product portfolio.
(10)

Remember the Value of Core Businesses

All this talk of Yahoo going into new markets and investing in other firms ignores one important factor: The company still has several important platforms, like Yahoo Mail, Messenger, Finance, News and others, that need to be cared for and built out. Yahoo has a core business in those services that can keep the company churning, but it can’t allow companies like Google to steal its users away. Focusing on the time-tested, old favorites at Yahoo isn’t such a bad idea.