Great article for anyone interested in American rail travel.
Does not get enough into the reasons why United States has not kept up with the World in rail travel. Perhaps it is because freight railroads have not wanted to give up space to passenger rail? American freight railroads have merged into huge operations and are extremely profitable. Who owns freight rail? Big companies, powerful owners. Let’s start with Warren Buffet.
Yes, there are other alternatives. One under development is Florida East Coast Railway. Already a strong regional freight carrier, they are building an important passenger rail project in Florida: All Aboard Florida, which will provide a fast rail connection between Miami and Orlando. 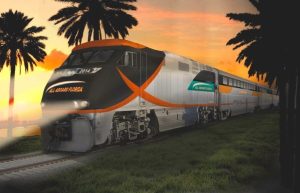 Amtrak is somewhat bureaucratic in nature because of it’s close government relationship. Joe Boardman is a career-long bureaucrat at both the Federal and New York State level.
Yes, the infrastructure requires improvements. Much of the money has gone to improving the Northeast Corridor between Boston, New York City and Washington. Otherwise, many improvements are needed. For example, passenger rail across the Hudson River at Albany uses a bridge begun when Abraham Lincoln was President.