According to the Metropolitan Transportation Authority, there were nearly 13,000 delays because of overcrowding in January. That’s almost double the number of delays in the same month last year.

The Second Avenue subway is expected to ease overcrowding on the Lexington Avenue lines and the MTA says three of the new stations will open by December of next year.

Transit officials say work on the 86th Street stop needs to be sped up to avoid delaying the project’s completion.

Crews are still working to get the 7 train to the far West Side this spring, but they’re dealing with some issues regarding the installation of elevators at the 34th Street/Hudson Yards station. 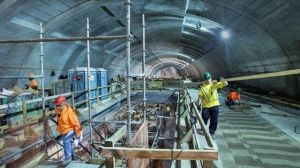 Long overdue repairs to the 168th Street and 181st Street stops in Washington Heights are being pushed back.

We brought you a story in 2013 about bricks falling from the ceiling onto the tracks and passing trains. Now the MTA hopes to have everything fixed by next year.

Finally, the MTA is proposing changes to two bus routes in Brooklyn and Queens that serve an area where many pedestrians have been hit.