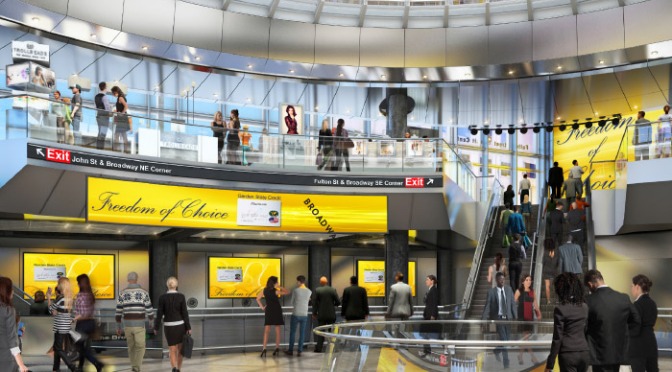 Action Under The Streets of New York City

Railway Age put together a great article on all the cool things happening underground in New York City: Made (mostly under) Manhattan Written by  Douglas John Bowen .

The new Fulton Center is great because it is something that is visible to New Yorkers. The Metropolitan Transportation Authority (MTA) recently  unveiled the Fulton Center, a fully digital transit and retail hub located at the crossroads of Lower Manhattan on Broadway and John and Fulton streets in New York City.

The $1.4 billion Fulton Center’s opening streamlines customer access to and from nine (soon to be 11) subway lines. And the debut of the related Dey Street Passageway, which also opened last November and is often ignored by the media, will offer pedestrians underground access to and from the nearby PATH World Trade Center station—in effect giving New Yorkers weather-sheltered access halfway across Manhattan’s downtown, from the Hudson River to past Broadway, and including numerous skyscrapers old and new in the process.

South Ferry Station is the most vulnerable of at least 10 flood prone subway stations, most

in Brooklyn and Queens, being addressed

The No. 7 line addition reaching toward Manhattan’s “far” West Side; and the Second Avenue Subway, decades delayed but now a real thing with an optimistic December 2016 opening date for Phase 1, and a Phase 2 add-on north to 125th Street being openly discussed.