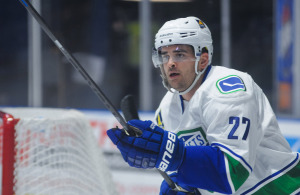 Despite firing a franchise record 54 shots on goal, the Comets lost their fifth game in a row, as they fell to the Toronto Marlies 3-2 on Friday night at the Utica Memorial Auditorium.

Coming back from a five-day break, the Comets struggled in the first period to get one past the Marlies goalie Christopher Gibson. The Comets had a total of 18 shots on goal but had no luck. The Marlies top draft pick, William Nylander, was able to slip one in past Markstrom, just 1:51 into the game for the period’s lone tally.

In the second period, the Comets were able to hold the Marlies off for almost half the period before the Marlies got on the board again. Connor Brown’s shot slid right under Markstrom to give them a 2-0 lead. Four minutes later Marlies center Greg McKegg shot one right over Markstrom’s right shoulder to take a 3-0 lead.

Yet, the Comets were determined, leading with 33 shots on goal, they kept getting closer to getting the puck past Gibson. Then at 18:23 the Marlies’ Carter Ashton was called for slashing, giving the Comets a scoring opportunity. The opportunity for the Comets got better when the 5-on-4 then turned into a 5-on-3 when the Marlies’ Brendan Mikkelson was sent to the box for a high stick.

Five minutes later the Marlies lead was cut down to one with a shot from Tom Sestito, (pictured at top) his first as a Comet, making it 3-2. For the rest of the game the Comets had many opportunities just could not get the puck in the back of the net. In the last 33 seconds of the game, the Marlies’ Sam Carrick was called for slashing, giving the Comets two-man advantage on the ice. Unfortunately the Comets fell to the Marlies 3-2.

Tomorrow the Comets travel to Toronto looking to redeem themselves against the Marlies in a 3 p.m. game time.