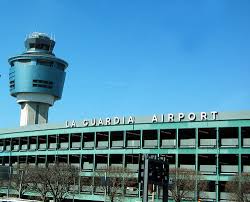 New York will build an AirTrain to connect the hellish human zoo known as LaGuardia Airport to civilization, NY Governor Cuomo announced this morning at a breakfast hosted by the Association for a Better New York. “You can’t get to LaGuardia by train today,” Cuomo said. “And that really is inexcusable. That is something we’re going to correct over the next several years.”

Cuomo said the AirTrain will connect with the 7 train and the LIRR at Willetts Point. The train will run about 1.5 miles along the Grand Central Parkway, “in an area that we believe won’t create an undue burden to any of the neighboring structures, and create a ‘one ride’ from the subway system or the Long Island Railroad to LaGuardia, which is truly long overdue.”

Cuomo also said the state is looking for a high speed ferry terminal to connect LaGuardia to Manhattan, as well as a hotel business center and retail shopping at the airport.

The timetable and cost of the project was not disclosed this morning, but Cuomo indicated that some of the cost of the AirTrain could be funded by the $5 billion New York State took in last year through settlements with foreign banks. A spokesperson for the governor’s office said that a statement with more details would most likely be released later today.

The AirTrain to JFK opened in 2003 at a cost of $1.9 billion. The MTA is currently in the final stages of locking in its $32 billion Capital Plan, and faces a $15 billion budget gap. Asked last year about the possibility of connecting the airport to the subway, an MTA spokesman said, “We have nothing in our plans right now to bring rail service direct to LaGuardia. Right now, we’re building the Second Avenue
Subway, digging in Long Island and the East Side, finishing the 7 Line extension. We’ve got lots on our plate.” The MTA had no comment on Cuomo’s announcement today. 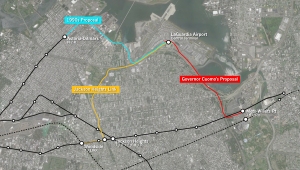 Find out about better tools and Fair Promise