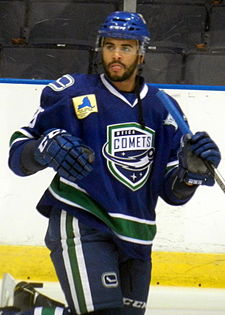 In their first shoot-out this season, the Utica Comets made it all the way to the fifth round until they fell to the Milwaukee Admirals 3-2 at the BMO Harris Bradley Arena on Wednesday evening.

Darren Archibald (1-0-1) (pictured above)and Hunter Shinkaruk (1-0-1) scored the Comets only two goals of the night early on in the first period of the game. Jacob Markstrom was tagged as the second star of the game by stopping 24 of the 26 shots taken on him by the Admirals. 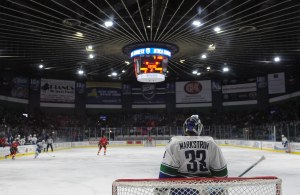 The game was barely able to get its feet off of the ground when Archibald scored the Comets first goal of the game just 37 seconds into the opening period. As the Admirals were attempting to exit their zone, Brandon DeFazio caused a disruption right at the blue line that turned the puck over right on to Archibald’s stick. It was him versus the American Hockey League’s leading goaltender, Magnus Hellberg, and with the flick of his wrist, Archibald buried a distanced shot past Hellberg for the early 1-0 lead.

At 12:30, Hunter Shinkaruk went back to the same spot Archibald found their first of the game and cashed in on what looked like it would be a harmless shot. Alex Friesen and Andrey Pedan teamed up to feed Shinkaruk the puck who then raced down the left wing. It didn’t take him long to release the rubber once he skated past the blue line, and it may have been a surprise to Hellberg who let the puck slip right through him which gave the Comets the two goal lead and Shinkaruk’s sixth of the season.

Following the Comets second goal of the game, Milwaukee made a decision to pull Hellberg and replace him with their back-up goaltender Marek Mazanec.

After pulling Hellberg the Admirals started to turn things in their favor. Milwaukee started to mount their comeback with 51 seconds left in the first period on the perfect tic-tac-toe play set up by Brendan Leipsic and Austin Watson. Viktor Stalberg received the last pass to the right of Markstrom and buried one into the open net to make it a 2-1 game as the Comets goaltender leaped across the crease while he tried to make the sprawling save.

It was a goalless second period until Milwaukee found the equalizer with only 10 seconds left in the period. While feeling pressure from the Comets defense, Viktor Arvidsson backhanded the puck towards the net. Markstrom had no issue with the save but the puck quickly came back to haunt him as Miikka Salomaki picked up the re-bound and banged in the puck to the right of Markstrom to make it 2-2. Joe Piskula received the secondary assist on the play.

After a scoreless third stanza, and overtime period, the Comets took part in their first shooutout of the season. Salomaki ended the game in the fifth round after popping in a backhander past Markstrom’s glove-hand for a final score of 3-2.

The Comets will have a day off on Thursday before they head to Grand Rapids Michigan to face the Griffins for their second and final meeting of the season. On Jan. 14, the Comets defeated the Griffins 4-2 at The Utica Memorial Auditorium.

Find out about Goals and Fair Promise