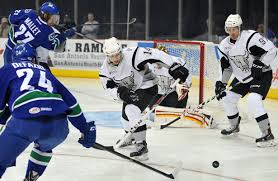 The Comets rode Jacob Markstrom’s 43-save performance to their sixth consecutive win against the Adirondack Flames on Friday night as the Comets slipped by the Calgary Flames American Hockey League affiliate 2-1 at the Glens Falls Civic Center.

After struggling on New Years Day, Jacob Markstrom redeemed himself by stopping 43 shots on the 44 taken by the Flames. The first star of the game is now 10-2-1-0 on the season all while boasting a new and improved goals-against average (1.91) and a .932 save percentage. The second star of the game, Ronalds Kenins found his way on to the scorer’s sheet twice this evening with two assists.

The game didn’t start out exactly as the Comets would have liked and were outshot 5-0 within the first five minutes of the game. The Flames effort finally showed up on the board at 13:13 into the first period after Frank Corrado launched the puck around the backboards for a partial clear. Bryce Van Brabant intercepted the puck behind Markstrom’s net and dished it out to Nolan Yonkman who was patiently waiting at the blue line for the slapshot. Just as the puck was making its way to its destination, Bill Arnold got a piece of it to sneak it past Markstrom to make it 1-0.

Moments later at 15:39 the Comets answered back with a give and go play from Kenins to Kane Lafranchise that would end up over the shoulder of Joni Ortio for the 1-1 equalizer. Alex Biega was credited with the secondary assist.

After taking the lead early in the second period at 4:27, the Comets somehow managed to keep their composure despite being outshot by 19 goals in the second stanza. The Comets second goal of the game resulted directly from a Cal O’Reilly pass to the front of the net. Henrik Tommernes met Ortio on the doorstep and tapped the puck in for the 2-1 lead and what would eventually be the game-winning goal. Kenins received his second point of the game with the secondary assist.

After Friday night’s win over the Flames, the Comets extended their lead over the second place Adirondack Flames back to seven points.

It’s another game-day at The Utica Memorial Auditorium tomorrow, as the Comets will take on the Iowa Wild at 7 p.m. for the first time this season. The Comets defeated the Minnesota Wild’s AHL affiliate twice during last years inaugural season.

Find out about Goals and Fair Promise