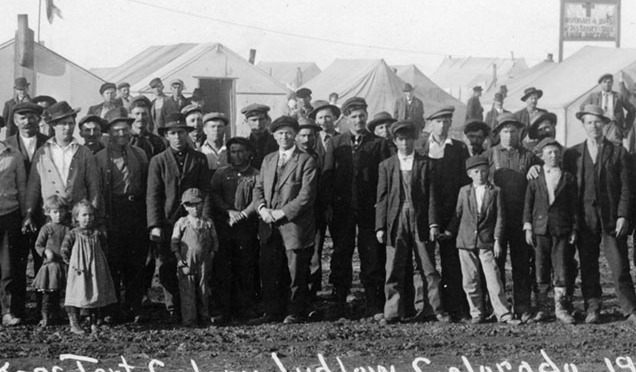 A friend recently sent  me a link to both a video and a story on an important event in American Labor History.  Not only that, it has music from one of my favorite singers: Woody Guthrie’s tribute to the good people who fought in the battles of Ludlow to help make a better tomorrow for everyone.

100 years ago, the Rocky Mountains were the source of a vast supply of coal. At its peak, it employed 16,000 people and accounted for 10% of all employed workers in the state of Colorado. It was dangerous work; in just 1913 alone, the mines claimed the lives of over 100 people. There were laws in place that were supposed to protect workers, but largely, management ignored those, which led to Colorado having double the on-the-job fatality rate of any other mining state.

It was a time of company towns, when all real estate, housing, doctors, and grocery stores were owned by the coal companies themselves, which led to the suppression of dissent as well as overinflated prices and an extreme dependence on the coal companies for everything that made life livable. In some of these, workers couldn’t even leave town, and armed guards made sure they didn’t. Also, if any miner or his family began to air grievances, they might find themselves evicted and run out of town.

The United Mine Workers of America (UMWA) had been organizing for many years in the area, and this particular company, Colorado Fuel and Iron, was one of the biggest in the West — and was owned by the Rockefeller family, notoriously anti-union.

Put all this together, and it was a powder keg.

When a strike was called in 1913, the coal company evicted all the miners from their company homes, and they moved to tent villages on leased land set up by the UMWA. Company-hired guards (aka “goons”) and members of the Colorado National Guard would drive by the tent villages and randomly shoot into the tents, leading the strikers to dig holes under their tents and the wooden beams that supported them.

Why did the union call for a strike? The workers wanted: (1) Recognition of the union as bargaining agent;  (2) An increase in tonnage rates (equivalent to a 10% wage increase); (3) Enforcement of the eight-hour work day; (4)Payment for “dead work” that usually wasn’t compensated, such as laying coal car tracks; (5)The job known as “Weight-checkmen” to be elected by workers. This was to keep company weightmen honest so the workers got paid for their true work; (6)The right to use any store rather than just the company store, and choose their own houses and doctors; (7) Strict enforcement of Colorado’s laws, especially mine safety laws.,

Please go ahead and watch the movie. I don’t want to spoil it for you.

Now that you know one of my favorite singers, let me introduce you to my favorite labor leader: John L. Lewis

(Picture above) Creation of the UMWA Welfare Fund, May 29, 1946. Pictured seated from left are President Harry Truman, Secretary of the Interior Julius Krug and Lewis.

In 1948 when there was a coal strike, Harry Truman threatened to take over the nation’s railroads. Coal-burning locomotives were restricted to 60% of their normal mileage. Even with diesel locomotives running around the clock, rail traffic clogged up. The takeover didn’t happen. It all involved Harry Truman and John L. Lewis.

John L. Lewis was president of the United Mine Workers Union from 1920-1960. He was a giant among American leaders in the first half of the twentieth century, regularly advising presidents and challenging America’s corporate leaders. His work to organize the country’s industrial workers through the Congress of Industrial Organizations (CIO) in the 1930s helped raise living standards for millions of American families.

Most impressive picture I have ever seen ANYWHERE is a 1940 poster of John L. Lewis at the Carbondale (Pennsylvania) historic society. The huge picture is at the top of a flight of stairs and IT IS AWSOME! In 1940, Lewis had considered running for President.

See a great biography of John L. Lewis on the AFL-CIO WebSite.