The best spot to find out about railroads in South Troy, including the Adams Street Freight House is from the model railroad club at RPI: 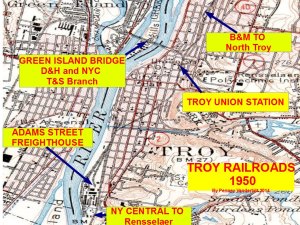 Note ln their map (and ours too) how the Troy Union Railroad headed diagonally from 6th Avenue in downtown to River Street in south Troy.
The Central had an engine facility at the foot of Adams Street. (Note the freight house extended all the way to Adams.)
The Central’s freight house still stands in south Troy.
There was a monumental structure that looked like a castle (or brewery), but it actually was Troy Waste.

There was a small airport up on the bluff which is now occupied by the Griswold Apartments. I understand the airport was only in operation from 1920 until 1927.

Other sources claim it operated until the 1960’s.

It wasn’t shown on a 1928 topo, but was shown in a 1935 Regional Aeronautical Chart. It is likely to have been a Works Progress Administration project. It closed in 1964.
In Troy, there was the main Union depot downtown, one in Lansingburg at 114th St., “Ironworks” by the Burden plant, and one more, between Jefferson and Adams.
The first Bessemer plant in the U.S. was built in south Troy. The Bessemer process was the early development of cheap steel made from iron. I’m not sure what happened to the Troy plant as it seemed that this area basically dealt with iron, not steel.
LABOR AND INDUSTRY IN TROY AND COHOES: A BRIEF HISTORY

Updated and Revised for the WWW:
Dr. Gerald Zahavi and Susan McCormick, Department of History, University at Albany, SUNY

A bus-train connecting Troy with Amtrak in Rensselaer?

Troy-based writer-publicist Duncan Crary has posted an interesting idea on his Facebook page: Why not use a hybrid of a bus and rail car to carry passengers between downtown Troy and the Albany-Rensselaer rail station?

He’s uncovered a vehicle that performs a similar function in Japan, and railroad maintenance crews in this country already use trucks that can travel on the rails or the highway.

The advantages: The lightly used rail line that runs as far north as Adams Street is about the most direct connection there is. You avoid the rush-hour congestion of I-787 across the river and you don’t get caught in local traffic, either. The tracks exist, and the vehicle Crary cites in his Facebook posting doesn’t look like it cost very much money. No doubt there’d be a fee for using the tracks, and concerns about keeping the bus and freight train traffic well separated. Staff and insurance would be the other costs.

A link to the post is here. And a link providing more details on the vehicle is here.

And here’s a follow-up note from Crary:

I think a bus-train would get better ridership than a normal bus for many reasons. The novelty would be one. Plus, though I ride the normal bus, many people have a stigma against it. But those same folks would ride a cool Transformer bus-train.

I also believe this bus-train option could end up being a huge benefit to the Burden Iron Works Museum and could lead to the restoration of a Visitors Center in downtown Troy, connected to the Burden.

Here’s the idea in a nutshell:

We get a dual mode bus-train that leaves the Alb-Ren train station.

The bus-train gets off the track at the Burden Iron Works Museum (good for the museum. Maybe even share the parking lot there for park and ride, or the city builds another lot close by).

Bus-train gets on the streets at Burden and continues to River Street near Hedley (where the Transit Center/Parking Garage is planned for the near future). People can use that Transit Center garage for a park and ride, too, and can also transfer to other buses if need be.

The RiversPark Visitors Center is revived and is located among the street-level retail spaces at the Transit Center, so tourists can actually commute between the Burden Museum and the Visitors Center, while getting a cruise through downtown.

This bus-train would get even more riders if the casino gets built in Rensselaer near the train station (which is a better location than the Exit 23 Noonan Farm location being talked about).

Here’s an article with video:

P.S. If Rensselaer gets the casino, I would also like it to have a cruise ship casino that goes between Rensselaer and Troy and picks up and drops off. I don’t gamble, but I’d ride the boat for fun and to get between the cities. You may recall I did a commuter cruise between Albany and Troy with the Dutch Apple. It was great: