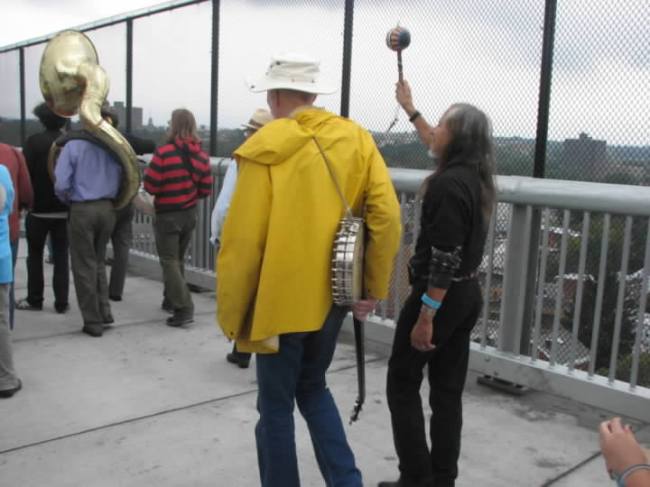 The Poughkeepsie bridge is open! The fellow in the yellow jacket carrying a banjo is Pete Seeger.

For 35 years, the ravaged Poughkeepsie-Highland Railroad Bridge awaited a rebirth. Opened on New Year’s Day in 1889, the rail bridge — now the Walkway Over the Hudson State Historic Park — was the first bridge to cross the Hudson River between Albany and New York City. The 6,768-foot span was used totransport goods, such as coal and grain from the Midwest to New England, for 85 years. Then, in 1974, a fire visible for miles rendered the bridge unusable.

The state Legislature charted the Poughkeepsie Bridge Co. to build the bridge in 1871. At its peak, 1,500 construction workers worked on the bridge daily, according to the Walkway’s mobile Web tour. Much of the construction was done from 1886 to 1888. Eight people died during construction, according to the tour.As many as 3,500 freight and passenger cars crossed the Hudson River span each day, according to Walkway Over the Hudson. But, as the decades passed, use of the bridge declined until only one train crossed per day, according to Journal archives.On May 8, 1974, a 700-foot-long fire charred the east side of the bridge. It was difficult to put out the blaze; the steel pipeline that supplied the bridge with water had burst the previous winter. As debris fell from the bridge during the fire, and igniting smaller fires in the city below, firefighters fought the blaze from the warped deck of the bridge and a ladder underneath. Full story and video.

The Great Bridge at Poughkeepsie

The Poughkeepsie Bridge after the 1974 Fire