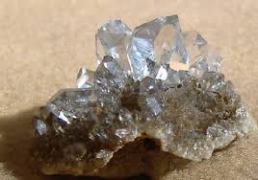 The bluebird. The sugar maple. The garnet. And now the Herkimer diamond?

The Mohawk Valley’s famous quartz crystals could soon join the ranks of those other state symbols if pending legislation is approved to name them the official mineral of New York. The measure already has passed the state Senate, and is awaiting Assembly action.

The bill, sponsored by state Sen. James Seward, R-Oneonta, has been in this position before; but Seward hopes this time it won’t die in the Assembly.

“This is a great way to highlight the uniqueness of the Mohawk Valley,” he said. “I just see all plusses in pursuing this.”

Several area business owners and officials agreed the bill would be nothing but good for the tourism if it passes.

“To have it more well-known than it already is can only enliven the economic activity in the area,” said Renee Scialdo Shevat, owner of the Herkimer Diamond Mines in Middleville and Gems Along The Mohawk, a visitor center located in Herkimer.

John Scarano, executive director of Herkimer County’s Chamber of Commerce, said Herkimer diamonds act as the tourism pull for the southern portion of the county, just as Old Forge calls people up north.

“We’ve got the Mohawk Valley DiamondDawgs, and the symbol of diamonds are on the county and chamber websites,” he said. “The name is out there; it’s synonymous with industry and tourism.”

The Herkimer diamond, a faceted quartz crystal, draws thousands of tourists, from both in and out of state, to a couple of mining sites each year. While here, they spend money to prospect for their own stones and to visit other local businesses. Mine owners say it’s not just a local draw, however.

“You can take a Herkimer diamond any place in the world and people know what it is,” said Ted Smith, owner of the Ace of Diamonds mine and campgrounds.