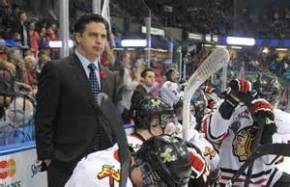 The sold-out auditorium at Friday’s Utica Comets game will push the team past a new attendance milestone — 100,000 fans.

The Comets announced Wednesday that all tickets had sold for Friday’s game against the Adirondack Phantoms. With a full house Friday, the auditorium expects to see total Comets attendance for the season reach 100,981 — an average of 3,366 fans per game.

Tickets are still available for Sunday’s game against the Milwaukee Admirals, which will feature a post-game autograph session for all fans in attendance. The first 1,000 fans will receive a Comets pennant, courtesy of New York State Tool, the release stated.

The Utica Comets will be working overtime through the final few weeks of their inaugural American Hockey League season, chasing a Calder Cup playoff spot all the way.

The Comets (27-27-3-4, 61 points) open a three-games-in-three-nights weekend when the Adirondack Phantoms visit the sold-out Utica Memorial Auditorium on Friday. That will be followed by a quick trip to Wilkes-Barre/Scranton on Saturday, then a date with the Milwaukee Admirals at home Sunday. There is another three-game weekend next week – all at home – and another April 4, 5 and 6, with the last two games on the road.

“Obviously, three games in three days is physically taxing, but you actually feel better the third night,” said Comets captain Colin Stuart, adding that players get into something of a groove along the way.

“You just get into game mode,” said defenseman Kent Huskins. “You prepare yourself and you do what you can.”

The rapid-fire schedule will mean, though, that there won’t be a lot of time for celebrating wins or trying to forget losses.

Mike Zalewski will not play for the Utica Comets this season.

The former New Hartford High School star signed a contract with the Vancouver Canucks last week after two seasons at RPI, where he scored 21 goals and added 26 assists in 75 games. It was thought that he might join the Comets, Vancouver’s American Hockey League affiliate, but the Canucks said Wednesday he is ineligible to be assigned to the AHL because he was signed after the National Hockey League’s trade deadline. He is listed on the Canucks’ roster, but it is unknown whether he will dress for any games this season or if he will be assigned to the Comets next season.