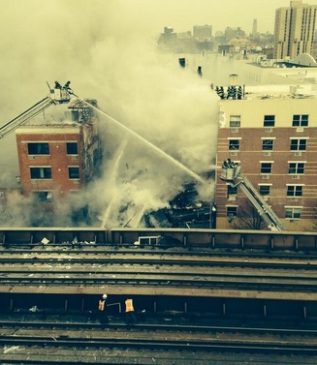 First of all a big five-alarm fire and building collapse on Park Avenue alongside Metro-North tracks to Grand Central Terminal.

Then, the National Transportation Safety Board (NTSB) is launching an investigation into the death of an MTA Metro-North Railroad track worker, who was struck and killed by a Hudson Line train earlier this week.

The incident is the latest in a series of accidents that have occurred at Metro-North during the past year, including the December derailment in the Bronx that resulted in four fatalities. In yesterday’s incident, the Metro-North worker was struck by the train while he was working on track near Park Avenue and East 106th Street, New York City news media reported yesterday.

The NTSB announced on its Twitter site that it was sending a team of three investigators to New York City to investigate the fatality.

Metro-North is undergoing government reviews and investigations for accidents that have occurred since May 2013, including a Metro-North foreman’s death while working on track, a derailment in Bridgeport, Conn., and the Bronx accident.