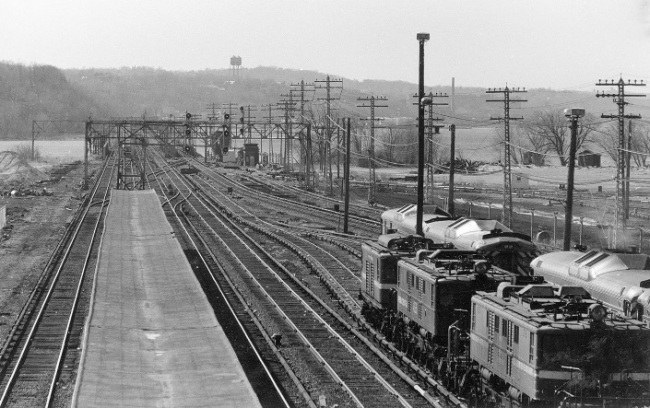 One of our most popular blogs is about the NY Central’s shops at Harmon, New York.

We are now bringing you more stories about Harmon as well as more pictures (courtesy of Wayne Koch).

In 1946, Niagara Locomotive 6001 is being pulled by 4 models to show how great Timken roller bearings worked.

The old station was torn down, in Penn Central days.

The station was torn down and relocated to the south of the original location about 1974-1975, and it might have been before that. The first time I used the new location, it was in the autumn of 1975. At that time, what is now the dry cleaners was the ticket office for both Penn Central commuter trains as well as Amtrak.

A catalytical factor in the change was the need to raise all the platforms for the new M-1 trains introduced about 1971. Also, the station was moved because the parking lot at the top of the hill became too small, and management wanted to make “modifications” to the yard which boosted the need to relocate the station “out of the way”. Now with more than ample parking, one must worry in severe noreasters, tropical storms and hurricanes about flooding in the parking lot.

The old New York Central station at Harmon was pretty neat, despite the killer climb up the stairs from the platform that seemed to go on forever. It was a self contained structure above the tracks, paralleling the bridge, which I’m sure served as the inspiration for the present structure.

I heard that the present station will soon be either “Modified” or demolished for something completely different, I suppose it’s part of the project to tear down the old New York Central engine house and build a newone. This will be the THIRD dramatic alteration of Harmon station at it’s present location, in just over thirty two years.

For any newbies, the bridge there now is NOT the bridge from Central days, you can still see the footings for it. The entrance to the old station was an enclosed walkway with a few small windows, immediately to the left of the bridge. Years ago , everybody called that station just “Harmon”.

If one were to model the Harmon station in HO or N gauge, the best start would be with the old Atlas coal mine, just because of the shape.