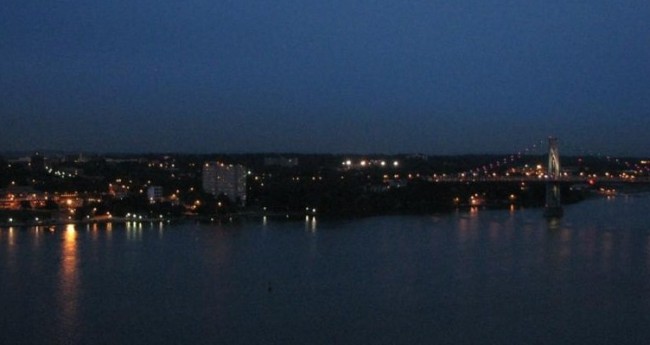 Trains no longer run over the bridge; instead it is a walkway. Bernie Rudberg took a great nighttime picture from the walkway. See more about the great Poughkeepsie Bridge.

Connecticut Western Railroad (chartered 1868) ran from Hartford CT to the New York state line, where it was to connect with the Dutchess and Columbia Railroad near Millerton NY.  CWRR was reorganized in 1881 as the Hartford and Connecticut Western RR.  By summer of 1882, H&CWRR had a route from Hartford to the Hudson River.
The Hudson River, nearly half a mile wide, was the biggest obstacle between H&CWRR and the rest of the United States.  Railroads used car floats to get freight and passengers across.  In 1871, the Poughkeepsie Bridge Company was chartered to build a rail bridge across the Hudson.  As this project neared completion, Hudson Connecting Railroad and the Poughkeepsie Connecticut Railroad were chartered to build rail lines westward and eastward, respectively.
The first train crossed Poughkeepsie Bridge 125 years ago today (12/29/13).  In 1889, HCRR and P&CRR were merged to create the Central New England Western Railroad, which then leased the H&CWRR.  This system was reorganized in 1899 as the Central New England Railway.
The New Haven Railroad acquired control of CNERy in 1899, mainly to gain access to the Poughkeepsie Bridge.  Penn Central Railroad closed the bridge in 1974 after a huge fire.  The structure was refurbished as a pedestrian bridge and reopened as Walkway Over the Hudson State Historic Park in 2009.