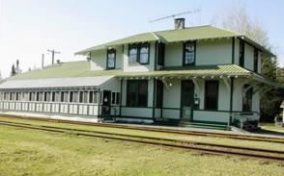 (Train station above is at Big Moose)

William Seward Webb‘s building of the Adirondack & St. Lawrence Railroad was a notable achievement. Although educated as a physician, he built two hundred miles of railroad in a short period of time and opened up wilderness where others had failed. Read More about Webb’s Wilderness Railroad.

Other features you won’t want to miss are the railroad to Ottawa and an Adirondack timeline of railroads.

Summary of Dates for how New York Central (now CSX) got to Montreal .

There are plenty of pictures on the site. See trains in snow . Find pictures of Big Moose Station , Old Forge and Malone .

Webb’s ancestors came to this country in 1626. His grandfather was a general in the Revolutionary War. His father was a newspaper editor who coined the name “Whig” for the political party of that name. He also served as ambassador to Austria and Brazil. William Seward Webb was born in New York City on January 31, 1851. He went to Rio with his parents in 1861 and returned to the United States in 1863 to attend a military academy at Sing Sing, New York. There he spent five years, after which he went to Columbia University until 1871. This was followed by two years of medical studies in Paris and Vienna, then more medical school at Columbia. He interned for two years, set up a private medical practice, then got interested in business.

He became a partner in a Wall Street firm. In 1885 he was elected president of the Wagner Palace Car Company and remained in charge of that corporation until it was merged with the Pullman Company in 1899. He used his executive talents to make Wagner into a strong and profitable enterprise. He increased the rolling stock from 170 to 800 cars.

In 1881 Dr. Webb married Lila Osgood Vanderbilt, youngest daughter of William H. Vanderbilt, by whom he had four children.

“Adirondacks” means “tree eaters” to the Indians, so named because a tribe who lived there had to eat bark because it was so tough to find food sometimes. Geographically, the region is bordered on the east by Lake Champlain; on the south by the watershed of the Hudson and Mohawk; and on the north and west by the St. Lawrence valley and Lake Ontario. The region stretches about one hundred miles east-west and seventy-five miles north-south. It consists of rugged mountains, virgin forests and numerous streams and lakes. The New York State Legislature established the area as a forest preserve and as a park. Dr. Webb made the Adirondacks a practical reality to the people of New York and the whole United States.