Plaque above commemorates Jean Moulin. It is a 22 rue de France in Nice.

Jean Moulin, hero of the Resistance

He was a member of the French prefectorial body. His Mediterranean origins led him to make, before the Second World war, several stays on the French Riviera. The light and the spectacular landscapes he saw contributed to his pictorial paintings he signed Romanin. He was Prefect of Eure-et-Loir ( Chartres) during the German invasion. The Occupants tried to humiliate him, provoking an attempt of suicide. Fired by Vichy in 1940, he took refuge in the free zone and went underground in the Alpes-Maritimes. Using the alias Joseph Mercier, he reached London via Lisbon, then London in 1941. Charged by General de Gaulle to unify the movements of resistance, he was parachuted back to France in 1942. The mission drove him a dozen times in the Alpes-Maritimes, where he met other Resistance leaders to gather them behind General de Gaulle. In 1942, he tried to get from Antibes to London in a submarine. After this episode, he opened a picture gallery in Nice, at 22 rue de France, which was inaugurated in February 1943. The Romanin gallery included the paintings of Max’s personal collection, and was managed by his friend Colette Pons and served as “cover” to his secret activities; The apartment situated above it received many representatives of free France and the Resistance until he was arrested in Caluire, toutured and later killed. His ashes were transferred to the Pantheon on December 19, 1964. A plaque on the facade of the former gallery Romanin, as well as in Antibes, Cannes, Nice, La Trinité, Villeneuve-Loubet; and about fifteen toponymical sites remind of his stay and his sacrifice.

Picture above is where his gallery was located. Now a “PMU” (betting parlor now) 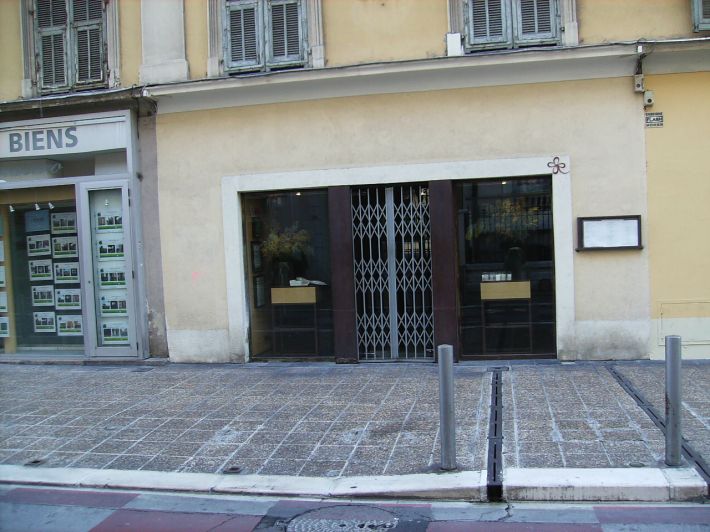 Next to his gallery and under his apartment is a restaurant.

Here is a classic picture of Jean Moulin

Here is another plaque in Villefranche 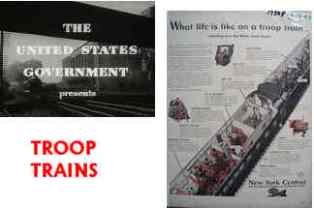 Troop Trains were important to the United States in previous Wars. The first war in which trains were used to carry Americans to battle was the Mexican War in 1846.   Extensive use of trains to carry troops occurred in both World Wars.

Here’s a preview of some of the exciting projects we have put together for you:

Our feature article is “All About Troop Trains”

We have a Troop Train Slide Show that will enjoy very much.

See all about Vietnam troop trains, including the last major troop movement from Junction City, Kansas to Oakland, California.

We have a section on Freedom Trains. and some great photos at The New Haven Railroad goes to war!!!

Find out about the Governor’s Island Railroad

See the Alco that went to war 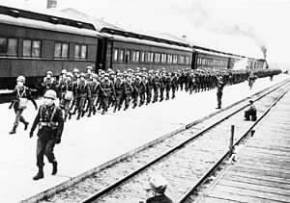 This isn’t a post about Grand Central Terminal. It’s about the New York, Westchester & Boston Railway Administration Building at East 180th Street and Morris Park Avenue in the Bronx, built in 1912. The railroad went out of business in 1937, but its distinctive home serves as the entrance to the East 180th Street station for No. 2 and No. 5 trains.And it received a kind of 100th birthday gift last year: a $66.6 million renovation by New York City Transit.

Yes, the railroad to Tahawus will start freight shipments from their first customer in February 2013. The customer is Barton Mines, which is closer to Gore Mountain than North Creek or Tahawus.

Barton Mines will be shipping garnet for industrial uses. They are the leading producer of garnet for products like waterjets.

Freight trains have been gone from the rail line for more than two decades.
the rail line is open from North River south, and Saratoga & North Creek Railway is working with “several other companies” in the region about using the rail for freight transportation.
Garnet, the January birthstone, derived its name from the Latin word granatus, meaning like a grain, which refers to the mode of occurrence wherein crystals resemble grains or seeds embedded in the matrix. Garnet is a family of minerals having similar physical and crystalline properties. They all have the same general chemical formula,

, where A can be calcium, magnesium, ferrous iron, or manganese, and B can be aluminum, ferric iron, or chromium, or in rare instances, titanium.

As ec-bp.com begins its 10th year of publication it’s interesting to note that while everything has changed… pretty much nothing has changed. We’ve all been through changes over the years. Some of us have changed jobs or even entire industries. Some have changed locations and relationship status. Change is inevitable, but not always in the direction we think it should go, and almost always not at the rate we would prefer. This year, eC-BP.com becomes once again independent, published by Revelationship, Inc. SPS Commerce was our sole sponsor for 2012, but has decided to concentrate on its own internally produced blogs. You will notice more, and more varied sponsors this year, and we believe this to be a positive move that allows eC-BP.com to focus on its primary mission. That said, eC-BP.com is all about making changes to supply chain operations, and we intend to do our best to influence those changes in the right direction. I invite you to join us in our efforts.
What kinds of changes, and how can you help?
Our new tag line is “eCommerce Best Practices for the Connected Supply Chain,” and that’s the theme of our mission; to identify those practices that make doing business through the supply chain better, easier, and more profitable. We identify those issues that work particularly well (and those practitioners who embrace them), and we also identify those issues that continue to block easy adoption of automation in the supply chain (and likewise, those practitioners who impose those blocks).

Systems and Tools……Languages and IDE’s…they are all just “parts”. Like water pumps and drive Some of our partners have been working with ECGridOS since late 2009 ….we take that seriously.belts. NOT~!~API’s and SDK’s…..all just tools. Like……socket wrenches…..and…..tire gauges. NO!!!!