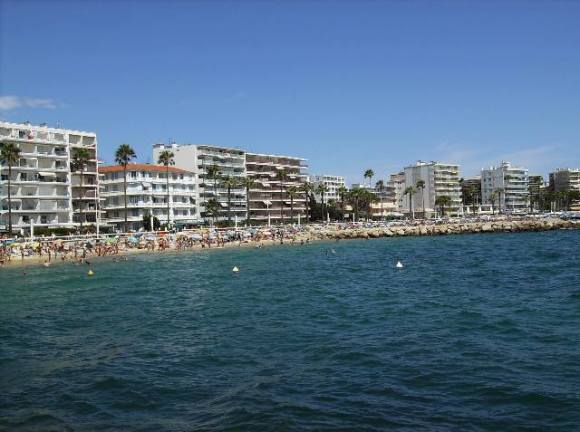 Our WebSite offers interesting and informative sections on:
Hotels in Antibes/Juan-les-pins and the surrounding areas
Biot, France
Golfe-Juan

Antibes was a Greek fortified town named Antipolis in the 5th century BC, and later a Roman town, and always an active port for trading along the Mediterranean. Today it’s an attractive and active town, popular with “foreigners” from Paris and the north of France, with non-French, and with the local population.

The natural beauty remains in the vieille ville (old town), with the ramparts along the sea and the long, arched protective wall along the port. There are plenty of little streets for exploring, restaurants of all types and prices, and lots of shops, from authentic little hardware/general-stores to tourist gift shops.

ANTIBES – JUAN-LES-PINS
Antibes is the proper name of this ancient town, but it’s commonly referred to as Antibes – Juan-les-Pins. The Juan-les-Pins part is a seaside resort and night-life area of sandy beaches, boutiques, night clubs and casino. The two places are close together, a good walk or short drive over the hill of the narrow part of the peninsula, or a longer and lovely drive around the coastline of the Cap d’Antibes.
ATTRACTIONS
The major attractions of Antibes are its history, climate, art, beaches and yachting. The sand beaches of Antibes are all manmade; the natural beaches are gravel (shingle in English English); in summer, these beaches are maintained using large tractors towing a device which scoops-up, sieves, spreads, and rakes the sand. Antibes’ beaches east of Fort Carré (that is, going toward Nice) are still the original rough materials.

Cap d’Antibes
The southern peninsula of Antibes is known as Cap d’Antibes. A bastion of wealth and exclusivity, it was the setting for F. Scott Fitzgerald’s Tender is the Night. The Hotel du Cap, called Hôtel des Étrangers in the novel, is still one of the most expensive and exclusive hotels in the world.

CAP D’ANTIBES
The highest point on the Cap d’Antibes is occupied by Phare (lighthouse) de la Garoupe, constructed after retreating Nazis blew up the earlier one, and a small Roman Catholic chapel, Chapelle de la Garoupe, containing a locally famous gilded wooden statue of Notre Dame de Bonne Port (loosely, Our Lady of Safe Homecoming), and noted for the variety of ex votive offerings (see votive deposit left by sailors and their families… or sometimes their widows.

MUSIC
Interestingly, Antibes was the site of two well-regarded live jazz performances – the Charles Mingus album Mingus at Antibes and a live performance of John Coltrane’s A Love Supreme, which was later released with the original in a deluxe package.

There is a major jazz festival, Jazz à Juan, held every summer in Juan-les-Pins that often attracts very famous jazz musicians from the United States, France, and around the world.

The Musée Picasso, located in the mediaeval Château Grimaldi, contains Pablo Picasso’s works from the year-long period he spent in Antibes.

La Garoupe (Antibes)
Built 1948 (station established 1837). Active; focal plane 104 m (341 ft); two white flashes every 10 s. 29 m (95 ft) round stone tower centered on the roof of a 1-story stone keeper’s house. Lighthouse is white, lantern painted red. This is a landfall light for Antibes, Cannes, and the Côte d’Azur; it is the most powerful light in the Mediterranean with a range of 31 nautical miles (57.5 km, 35.5 mi). The original lighthouse, a 24 m (79 ft) cylindrical masonry tower, which was blown up by German troops in 1944. The lighthouse is surrounded by the Bois de la Garoupe, a 9 ha (22 acre) forest preserve managed by the city of Antibes. Located on the Route du Phare in Antibes, overlooking the Baie des Anges. Site open, tower closed.

Plage de La Garoupe (La Garoupe Beach), on the Cap d’Antibes, used to be the favourite beach of Fitzgerald and Murphy. The Cap d’Antibes, marked by the lighthouse at the highest point, is a lush setting of some very large and very expensive estates, even by “French Riviera” standards. It also has the hotel of choice for some famous people, such as Madonna, who prefer to avoid the bright lights and bussel of the Croissette in Cannes during their short stays on the Côte d’Azur.